“The Cleveland you see today is different from the Cleveland you may have heard about in the past. We are making strides towards becoming a “Green City on a Blue Lake,” complete with neighborhoods of choice for both young professionals and families to live in, tremendous food and entertainment options, and, most importantly, an increasingly affordable and connected environment to start and grow businesses.” 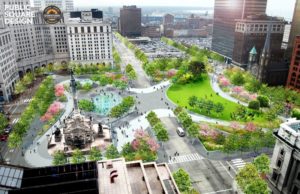 Public Square renovations to be completed by June 2016